John Powell, an African American, joined the Mennonite Church as a youth and was active in the mission enterprise of the church as an adult.  Because the church was so slow to change he left the Mennonites in anger, but then returned to the church to be a cultural peacemaker and advocate. He is a member of the Indiana-Michigan Mennonite Conference.

When Rachel and I toured Florida while visiting churches, we visited John and Shirley in their winter home.  We enjoyed commonality in many things. This morning I placed a picture from that visit as the header of the website to honor them and to ponder what can be learned from the death of Nelson Mondela. 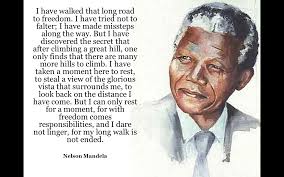 Perhaps Mandela’s greatest achievement was to lead the peoples of South Africa to forgive those who had oppressed them. Much will be said about him in these days of mourning and remembrance.  No more words are needed, except for me to honor the peoples of the earth who forgive with grace and invite their former oppressors to join in building a new future. Black children, and children who are known as colored in South Africa, are reported to be singing and dancing the streets in his honor because he enabled their freedom.

Today there is much just resentment against the United States and its allies and there is  need for forgiveness by everyone everywhere.  Perhaps the white “Christian” world must learn to forgive atrocities  before it can be forgiven by the survivors of its wars.

I subscribe to Thoughtful Mind and recommend it. Here is the quote for today in my inbox:  “Resentment is like drinking poison and then hoping it will kill your enemies.” ―  Nelson Mandela.

There is a message here for our own nation and it growing diversity.  This reminds me of a conversation between Krista Tippett, Vincent Harding and Phyllis Tickle. Harding challenges us to build a new nation and create a new union that makes full use of our rich diversity.

I was born 92 years ago, the son of a Mennonite pastor and organic gardener in Franklin County, Pennsylvania. At age 10 I was baptized as a member of the Marion Mennonite Church. I own the "Old Fool" moniker because I want to walk the Jesus Way even though the world and much of the church takes me as a fool for doing so. In my life I have moved from being a young conservative to an elderly radical. I tell that story in My Faith Journey posted on my website.
View all posts by Martin Lehman →
This entry was posted in Faith, Politics, Uncategorized. Bookmark the permalink.