Change-making is a slow process. We’re about to celebrate the fiftieth anniversary of the march on Washington and Martin Luther King’s famous  “I Have a Dream” speech. Two years later, the the civil rights law was enacted and signed by President Johnson. Recently they say that law was  gutted by the US Supreme Court.  States are rushing to hamper voting rights.

Susan B. Anthony was born in 1820. At age 3, she had learned to read and write. When she was 6 years old and in the first grade, her father removed her from the public school in which she was enrolled. Her teacher had refused to teach her long division because of her gender.  In that  environment she became an abolitionist before the civil war and was an out-spoken advocate of a woman’s right to vote.  The nineteenth amendment that gave women the right to vote was passed 93 years ago. 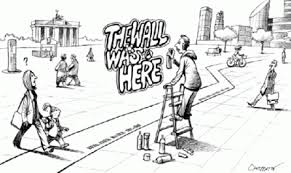 Only 26 years ago President Ronald Reagon made his famous “tear down this wall” speech in Berlin. Two years later the wall dividing Germany into east and west was torn down by Berliners on both sides. A few years later the word détente was used to describe the warmer relationship between Russia and the United States.

Now there is a wall separating Israel and Palestine.  I wish President Obama would say: “Prime Minister Netanyahu, tear down this wall.” It would be a huge step toward peace if Israelis joined Palestinians in tearing down that wall.

Contrary to its best interests,  the United States is building  a wall/fence on the border that divides it from Mexico.  Isn’t it time for someone in power, someone like the President of the US or the governor of Texas, to say: “tear this fence down!”  It will be a great day for America when Texans and Mexicans join hands in tearing the fence down.

Granting a human right or tearing down a wall are moves toward peace. But acts of justice alone cannot bring the shalom promised by the kingdom  to come. An eye for an eye is justice done, but the United States and the world must do better than that! Shalom-makng is better than requiring what is fair and just.

I was born 92 years ago, the son of a Mennonite pastor and organic gardener in Franklin County, Pennsylvania. At age 10 I was baptized as a member of the Marion Mennonite Church. I own the "Old Fool" moniker because I want to walk the Jesus Way even though the world and much of the church takes me as a fool for doing so. In my life I have moved from being a young conservative to an elderly radical. I tell that story in My Faith Journey posted on my website.
View all posts by Martin Lehman →
This entry was posted in Biblical Interpretation, Politics, Uncategorized. Bookmark the permalink.

2 Responses to Changes Better than Justice