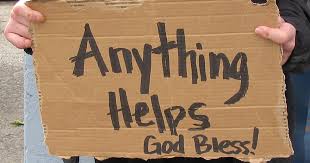 One day a man approached me in the Publix Super Market’s parking lot.  He said he was hungry and asked for 5 dollars for food.  I immediately gave him what he asked for, thinking, here is a reasonable man. He is not collecting coins with which to buy booze, or to satisfy some other habit. He was really hungry, and I believed he would do as he said.

The stranger accepted my generosity, and before we parted he asked if I had a job for him. I thought of my back porch, and said “yes.”  I told him where I lived and we agreed that he would come to work the next morning. 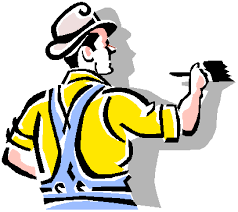 y the next morning I had on hand a supply of paint and a new paint brush.  He arrived as scheduled and we agreed on a reasonable hourly wage.  Then he confided that he had not had breakfast, and asked if he could have an advance on his wages and could go back to the Publix for something to eat.  I gave him the advance he asked for and watched him walk off.  I thought, there goes my money and I will probably never see the man again.

He surprised me by keeping his word another time,  and he worked that Thursday as agreed.  I invited him to return the next day but his answer was “No.”   He said he kept Friday holy to the Spirit, Saturday he kept holy to the Father, Sunday to the Son, and Monday to the Virgin Mary. I agreed that he could rest on his four holy days, and he agreed to return to work on Tuesday morning.  And he did.

One day while working he overheard that my part-time secretary, Barbara Batchelder, had dropped in to visit us.  He came into the house for a drink of water.  Later he told me that he wished to see our guest because her name was Barbara, the same as his wife.

When he had finished the work on the porch I told him I could use him for one more job. I had sold several hives of bees that I wanted to deliver to the new owner in the country.  I had borrowed  Jimmy batchelder’s pickup truck and had plans to move the bees at night.  I explained the hazards and told him I had a veil for his use.  He agreed to help me and we moved the bees without incident. 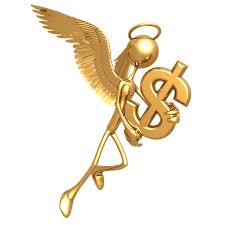 On our way home that night he asked to be dropped off at his sleeping place.  Between my home and the Publix was an abandoned Dairy Queen where only a few months before the man in charge had been murdered in a robbery.  I last saw my friend as he got out of the truck and crawled through the broken glass of the front door of the forsaken building.

Who was this mysterious man?  Was he an angel?  Or was he a man, more whole than I?  The latter, more likely. We were both quiet men, and I asked no question that would intrude into his privacy. There was no tension between us.

When I told this story at the family table recently, I was advised that it must be written.  So I am blogging.

I was born 92 years ago, the son of a Mennonite pastor and organic gardener in Franklin County, Pennsylvania. At age 10 I was baptized as a member of the Marion Mennonite Church. I own the "Old Fool" moniker because I want to walk the Jesus Way even though the world and much of the church takes me as a fool for doing so. In my life I have moved from being a young conservative to an elderly radical. I tell that story in My Faith Journey posted on my website.
View all posts by Martin Lehman →
This entry was posted in Faith, Family, Uncategorized. Bookmark the permalink.